Sleepy and too late again, Sanita sneaks into the classroom. She sits down next to Bright who is hiding his face behind his folded arms as if this would make him invisible. Laethicia adjusts her plastic crown on her head and blankly stares at the slide rule, while Fuat prefers to dream about riding in a car with his father.

Fuat, Sanita, Bright and Laethicia live in Berlin and they are all confronted with the same problem: they are first graders. It does not matter whether they are Nigerian, Bosnian, German or Turkish; for the 7 year-olds going to school means the daily confrontation with the feeling of being different.

However, there is no place for emotions in a packed classroom. Everyday life is a lonesome rat race for adjustment and accomplishment. But who will get a chance and who will be left behind? A moving journey back to childhood.

A production of Film and Television Academy (HFF) - Konrad Wolf 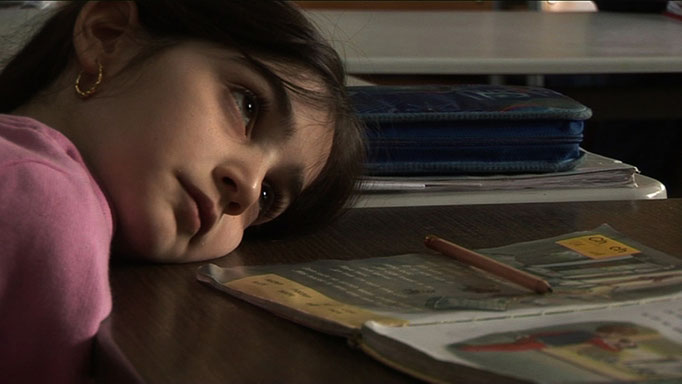 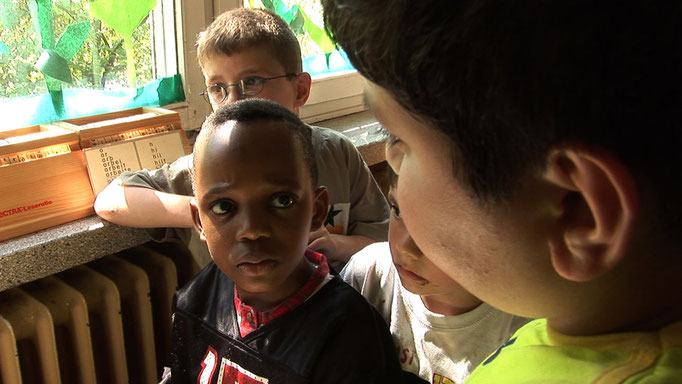 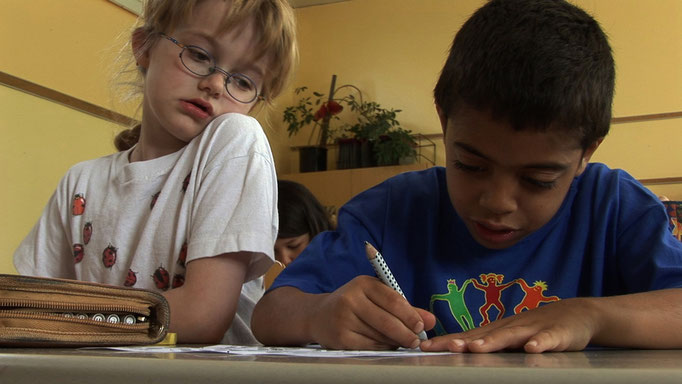 Looking into children’s eyes is a little like looking into the future: There is hope, there is a sparkle of curiosity, there are roguish smirks, and smiles of longing. But their eyes can also darken and evoke an inkling of something very opposite. Sophie Narr and Anne Misselwitz let us participate in the everyday life of a few first graders from Berlin’s Wedding district. The fact that most of them do not have a German family background is of little consequence, yet it remains always important. More than that it is the new requirements which can become excessive demands quickly, it is the fact that duty now takes priority over pleasure, and the (still) unknown structures which dominate the everyday life in school.

There is no commentary „from outside“. In sensibly conducted conversations the children themselves tell about their small and big hopes, their wishes, longings, and problems. The camera observes them cautiously and with empathy during the lessons, in the break, before and after school, and in their free time. The film remains always on eye level with the protagonists – and displays them with dignity.

Due to a clear-cut dramaturgical structure the resulting expressive mini-portraits form a display detail of our multicultural society in Germany in 2008. THE AMOUNT OF SMALL THINGS is a film of small but lasting impulses for thoughts. If we do not evade these thoughts, they will result in deeper considerations: How do we deal with each other and with our children? How do we address the future – within the family, at school, and in society?

Always on par with the pupils.

A first graders’ classroom is a place we all know. Usually our first conflicts arise there. We immerse in Fuat’s, Leathicia’s, Bright’s and Sanita’s world. This film is never judgmental or presumptuous. Its unprepossessed view enables a direct experience of the pupils’ feelings. This film leaves its marks. 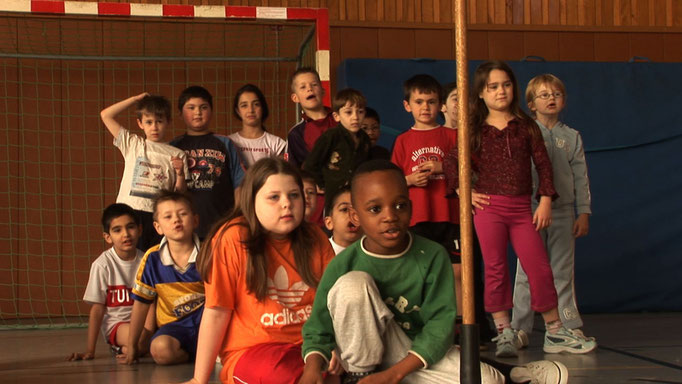 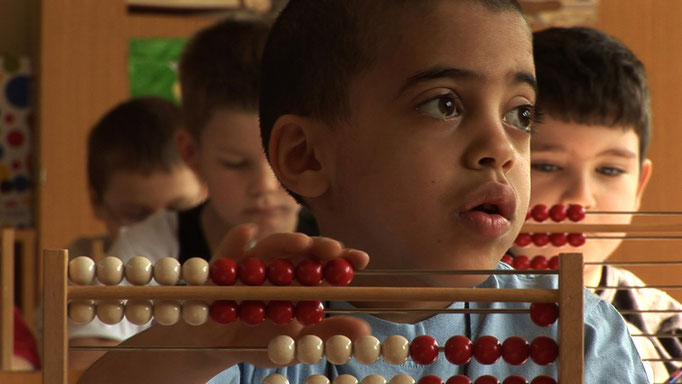 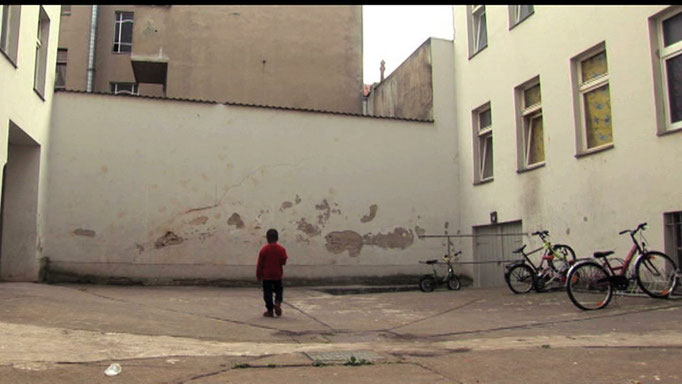 Radio Eins: DVD OF THE WEEK

»This film is too smart to give a simple answer to all the sociopolitical and political questions raised.« (Anke Leweke, 14th September 2009)

Taz: A FROWN TELLS A LOT

»This purely observing documentary is more than a commentary on German educational and immigration policies. The viewer is taken along to the every day life of children who bravely face the school's requirements and fight with life outside the classroom just as much.« (Anke Leweke, 27th August 2009)

»With it’s emphasized down to earth approach and the city setting Narr’s film can confidently be seen as a counter-model to the rather sentimental French idyll of a one room school. Against Philibert’s heroic small town teacher in „Être et Avoir“ stands the reality of excessive demands on pedagogues in Wedding.« (Silvia Hallernsleben, 27th August 2009)

»This film dispenses with commentary and subsumption and therefore prevents the adult viewer from qualifying the children’s surrender to difficulties and challenges with his knowledge and experiences (...) The film’s point of view is rather contrary to the parents’ perspective. At the day of enrolment the kids leave the sphere of parental influence and care to be released into a foreign world.« (Ulrich Seidler, 26th August 2009)

»Sophie Narr affectionately portrays children’s proactive attitude, frustration and rebellion. Reality hits the dreamt away world of a child: this film is an invitation for adults.« (Marisa Lange, 26th August 2009)

»The question raised in Sophie Narr’s film is painfully urgent: What is the society’s situation when children’s initiatives, curiosities and inventiveness are blighted because there is no time for encouragement?« - WORTH SEEING (Alexandra Seitz, 19th August 2009)

For weeks I sit in a corner, punished with indifference, watching 22 alien children between six and eight years during their talk-and-chalk lessons. Not only are they strangers to me because they do not want to tell me their names, but also because they do not want to know anything about me. They are like shells that invite projections and grin sardonically over and over again when I voice speculations about their characters packed in shy questions.

No, they do not know why I am interested in them and they do not know, above all, why I am always there. Sometimes they observe me how I observe them. I smile and they pull a face at me. But anyway I stay put. They have noticed me.

I am at Anna-Lindh elementary school, which is located in Berlin’s Wedding district. The fact that the share of foreign nationals here is counting about 60 percent reflects in the blend of pupils. More than 40 percent of the first graders will be certified as having bad to unsatisfactory command of German language.

In class 1e realities clash. The multi-colored mixed ethnic-religious backgrounds demand a big tolerance among the children themselves and above all from the teacher. The majority of the children comes from Turkey, the others are from Lebanon, Bosnia, Russia, Nigeria or Colombia. Yet in contrast to many of the parents, their special cultural situation does not carry much for the children. They back away from being different. They do not want to be different and consequently have little interest in their origins. Many of them do not even know where their parents come from and are ashamed of speaking their language at school.

A deliberate and deep involvement with their origins fades away behind a far bigger and much more serious problem; the gap between the everyday requirements at school and their living conditions outside the school since life at the poverty line and the often following lack of prospects for their parents also had an influence on the lives of the six- and seven-year-olds.

In conversations and drawings, the children finally show their small and big hopes, wishes and problems. Gradually a picture detail of our society in Germany unfolds. Little but enduring food for thought emerges, which forces us to think more deeply and in a more universal way: How do we deal with each other and how do we treat our children?